Finally, a New Apple TV: Can It Conquer the Living Room for AAPL?

On Sept. 9, Apple (AAPL) held a media event where it showed off the latest iPhones and a new iPad Pro. The company also unveiled one of the most overdue product updates in its lineup: a new Apple TV. 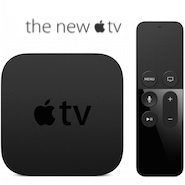 This little black box was a frustratingly obvious problem that AAPL seemed intent on ignoring. After helping to kick off the popularity of set-top streamers and coming to dominate that chunk of prime living room territory, Apple last updated its Apple TV hardware with the third-generation version in March of 2012.

In the years since then, competitors like Roku have relentlessly improved, while other tech giants have recognized the opportunity to become the conduit between consumers and increasingly popular streaming video services. First Google(GOOG, GOOGL) — with its Chromecast — then Amazon (AMZN) — with its Fire TV — arrived on the scene and soon eclipsed the Apple TV with features like voice command, universal search and gaming.